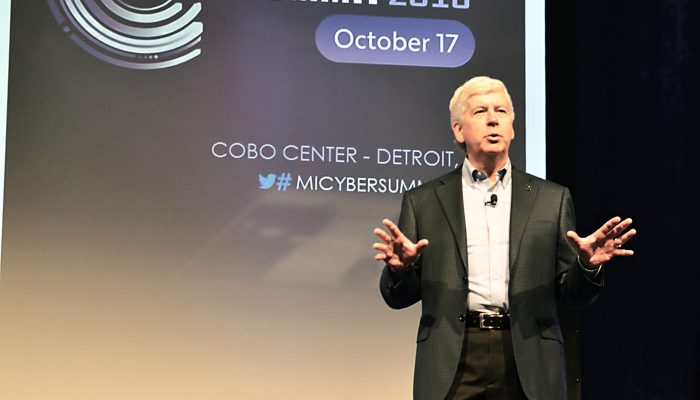 Lengyel spoke to attendees about innovations in our current and future security environment. “The requirement for innovation in our current and future security environment is not optional, it is an imperative. The Department of Defense is being innovative in partnering with public and private-sectors partners. Superiority in the cyber domain as a battle space is critical as we deny our adversaries, both state and non-state actors, access to critical data and infrastructure and we deter cyberattacks on our critical infrastructure. The National Guard has a unique connection to the civilian sector because of our part-time force, and the technical and innovative skills that many Guardsmen possess. This capability can be leveraged as a way to solve many security challenges,” said Lengyel.

Lengyel added, “In the past we could rely on the technological edge when it came to our military, however, as the technology base has become more global and the speed and velocity of change increases every day, our technological lead has been marginalized over time. Now we have to work even harder and must develop the best and brightest people to combat this problem.”

As Lengyel talked about the importance of the National Guard being a part of this fight to protect the homeland when it comes to cyber security, he discussed how the National Guard does three things particularly well: fight the nation’s wars, protect the homeland, and build partnerships. He emphasized ways that cybersecurity and awareness fits into each one of these missions.

Governor Rick Snyder also addressed the audience during the conference, using the opportunity to restate his support for Michigan’s Cyber Civilian Corps, a cyber-incident, rapid-response team comprised of State, National Guard, and both public and private partner representatives.

“The Civilian Cyber Corps is modeled like the National Guard,” said Snyder. “It is comprised of citizens with cyber-defense skills who could be called up to defend their state and country,” Snyder continued. “I think of the CCC members as cyber soldiers and cyber citizens. The model has worked for the National Guard for 378 years and it can work for us today.”

Among some of the conference attendees were teenage cadets from the Michigan Youth Challenge Academy and representatives from the Michigan Job Core. The students were able to meet and talk with Snyder and Lengyel about their future plans. “Just keep up the good work and keep working hard at whatever you do,” said Lengyel to the youths. Snyder also thanked them for their commitment to becoming better stewards of their state and contributing citizens and community members by challenging themselves to go further and dream bigger. He praised their internal initiative toward taking action to achieve their goals.

The cyber conference was primarily sponsored and organized by Snyder and his staff. It provided an opportunity for ideas to be exchanged across public and private cyber defense sectors and for partnership opportunities to begin and flourish.