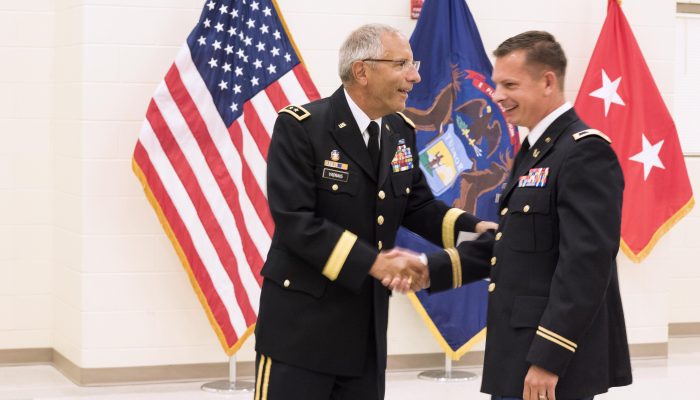 John Wojcik, of Grand Ledge, Michigan, the staff judge advocate for the Michigan National Guard was promoted to colonel, July 26. Wojcik received his new rank from his wife Kimberlie, during a ceremony held at Joint Forces Headquarters in Lansing, Michigan. He has served as the general counsel for the Michigan National Guard since April 2002 and was appointed to his current position in May of 2016.

During Wojcik’s 26-year career he has served in a variety of assignments to include infantry mortar man, trial counsel, trial defense counsel, command judge advocate and assistant state staff judge advocate. In 2010 he deployed to Afghanistan where he served as the chief lawyer for a theater detention facility. In his current assignment he is an advisor to the director of Military and Veterans Affairs, providing strategic legal coverage for approximately 11,000 members of the Michigan Army and Air National Guard.

Wojcik is extremely active in teaching military law to lawyers and was instrumental in creating the Ingham County Veterans Court and the Military and Veterans section of the State Bar of Michigan. In May of 2016 he published a guide to assist lawyers in handling family matters the involve service members. He has taught numerous courses at Cooley Law School.